(there have been a few edits made for clarity)

I’ve been thinking for some time about what the criteria of a laurel are. Mostly because that’s the path that I’m on, and I feel like having a clear-cut goal is a really good thing. A standard that you can reach to feel as if you’ve made it, and be pleased with yourself.

That out of the way, my criteria are simple: could you have made a living, in-period, out of your work. Put another way (thanks, Wolf!) – ‘would people in period spend the money they need on food on what you make/do?’

I am aware that this is perhaps rather strict, and a narrow definition, but hear me out.

END_OF_DOCUMENT_TOKEN_TO_BE_REPLACED

It’s been awhile, for those of you who are interested, hasn’t it?

I haven’t been lazy, however! Just working on projects that weren’t my own. The big things were that the husband got Plauricaned (what we’ve determined the combination of Pelican and Laurel on the same day is), and that went mostly swimmingly, and I’ve spent the last few weeks living and breathing the stepping down clothing for Ailgheanan and Amber, who just stepped down as King and Queen of Atenveldt, with a side-trip down the land of a cap of maintenance for a friend’s Pelican elevation.

That last one will get an update when I redo some aspects of the cap. I want to talk construction more in-depth in reverse. It’s modern, all things considered, but I do like it.

This brings us to where we go from here. I really should keep up the momentum and work on things, considering that I took a few days off to completely reset and do absolutely nothing but snuggle the pugs and watch shit on YouTube.

Major fall/winter plans (that don’t include finishing up projects I already have) are: 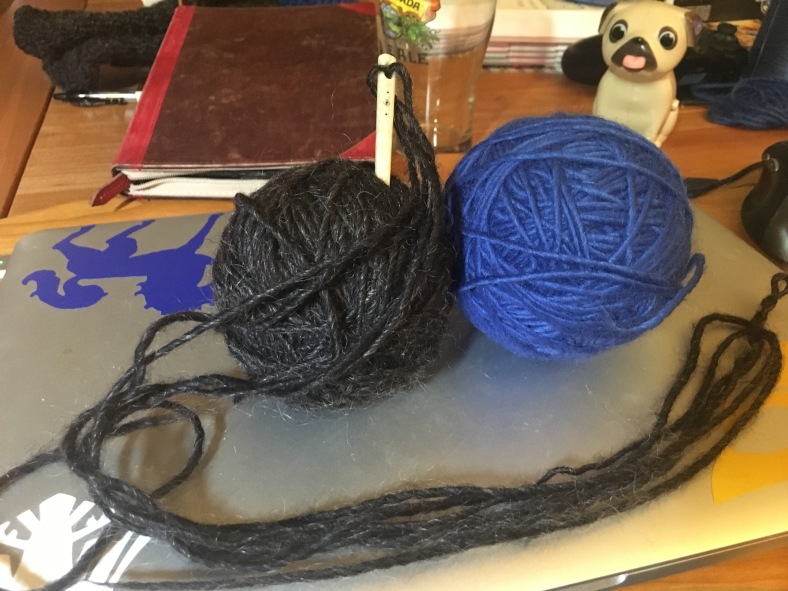 (note – parts of this post are taken from documentation i wrote some time ago for arts and sciences competition entry. dear gods, i need to work on my writing! if anyone is interested in the full text, though it’s not much longer, let me know!)

Naalbinding can be described as the precursor to knitting, and is the art of knotting or looping fiber together to create usually an article of clothing. I promised Dom a pair of socks years ago, and while there’s a story involving one pair, Mammen stitch, and not putting them on properly… he’s never gotten a set.

Well, if this isn’t a time to make them, I don’t know what is?

END_OF_DOCUMENT_TOKEN_TO_BE_REPLACED

At this point, I’ve been playing in the SCA for about a decade. I’ve made clothing from several regions and places (there was a 14th century kirtle at one point, and I do have something middle eastern and ostentatious), but I find that I keep coming back to the Vikings. There’s so much to research and learn, that I admit I’ve also found myself a bit overwhelmed. Where do I want to begin? I want things from Birka and Gotland and everywhere! And I want it all in one outfit!! After all, it’s all Viking, right?

Well, as I’ve started to do more research and talk to more people, I realize that’s a bad plan.  If you want to do things properly, you should probably pick a time and place and focus your attention on that. The SCA means that I can throw lots of things together, and so long as it looks good from a reasonable distance, there’s pretty much no reason to worry. Creative is in the name, so we might as well make use of it!

This is in comparison to the reenactment mindset, which (to put it incredibly simply/generically) would like you to be as accurate as possible, from as close as possible. It means that there are some things you will need to pass on, because they just don’t work. (For me, this means the Gotlandic fish pendants are out – which is probably a good thing for my wallet. I lust after those things…) And it also means that you will try to look like someone in that time and place, and live how they lived.

So, why have I decided to try and go from broad and semi-generic to a very specific time and place? Isn’t that going to be limiting? And in the end, don’t we do this for fun, and shouldn’t the shiny and pretty be fun?

Well, there are two reasons. The first is that it limits me, and in a good way. I have a bad habit of deciding that I should try to make something considerably more complex than I am actually capable of making. This then causes me to give up and hate what I’m doing, put it aside, and repeat this whole process again a few moths later. By picking one location, I’m forcing myself to focus on a very specific group of a culture I’m fascinated by. It has the added bonus of being a place where  one can find everything from simple items to complex ones that will challenge me and let me  actually grow as an artist and maker (gods, I hate that term in this context, but it works).

The second reason may, at first, seem to be completely opposite. It gives me enough space to explore. As in reason one – I can find simple and complex items that interest me and will allow me to work at my skill level. But it’s also going to give me a breadth of material culture that will allow for exploring. I can dabble in various aspects of a single culture and not feel like I’m abandoning my big picture goals.

See, the final goal for me in this journey is to have the skills and clothing suitable for a middle-class (and possibly lower-middle-class by modern standards) woman. I want to be able to feel like I could survive in circa-10th-century Denmark/Germany.